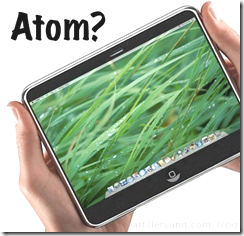 The latest Apple tablet tease is that one with a 12- or 13-inch display will appear in September-October.

"It will run the full Mac OS X and have a slot loading SuperDrive, an iPhone-type GPS chip and an Intel Core Duo processor, presumably Intels Atom," claims Jason D. OGrady in a ZDnet blog.

"Whether itll be a based on the iPhone or MacBook form-factor remains to be seen. Youll recall that Intel Germany CEO Hannes Schwaderer spilled the beans that an iPhone that will be using Intels new Atom processor after which he was quickly corrected by Apple. Where theres smoke, theres fire indeed."

True? Whos to say? Still, its fun to imagine Mobipocket and eventually a native ePub app running on the inspiration for the tease.